In defense of public pensions (sort of...) (or, A Call Back to the Real Conversation)


I recently spent a year with an amazing, dedicated group of 12 local citizens examining the budgets of our city. It was eye-opening on so many levels. The most important thing I took away is that that we have a lot of people doing a great job talking about how to stop the hippo's back from getting wet in the rain.


For example, all this debate about public pensions. I predicted the waste but "I told you so" doesn't do much to quell my oil-fire frustration. So I'd like to take a minute with some approaches to this issue that I haven't seen talked about much.

And I'll start with this question:

Doesn't is seem strange that we don't expect employers to take any responsibility at all for their employees' later years when calculating profits?

It's like we think, "You are buying my hour but otherwise, I'm free." That's just not true.

Employees are at a significant power disadvantage in a business contract with an employer. Have you ever tried to get anything changed in an employment contract before you sign it? To me, that alone makes the fairness of a contract meaningless. And essentially, all the contract does is insist that there exists no relationship between us, employer and employee, just an exchange of value. Very Ayn Rand. 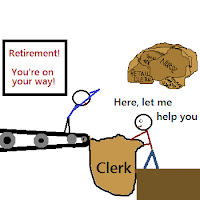 But the deal sucks for employees. They must stake all their good years of labour for another person's profit, just to eke out the level of lifestyle they can, faced with an increasingly expensive society. IF they can get a job. It's not as though there are choices. You can't just go live off the land somewhere - someone owns it. You must participate in this game you were born into, and all you can do is try to win. The trick is to do it with your soul intact.


Yet, the employers pay for our precious hours, our labour if you will, as if it were nothing. They earn sometimes thousands (or millions) of times what they pay a person on the labour of that person's year. I held a $95k job that had one key goal - to earn the company at least $1 million dollars. Pretty good return on investment, for Someone. And that doesn't account for all the value they got from my creativity, unique perspectives and relationship-building, or the subtle part I played in helping create leaders throughout this community and the world just by spending time with them in conversation. And they, me. So what is the value of that? What is the value of what you bring to your workplace that is utterly unique and special? It's more than they are paying.

That is a year of my rare and precious time, my most valuable "golden" time between 25 and 65 (oops, 67), that I cannot get back. But later, I won't have those choices, to work or not, to earn more or less, to be reliable or unreliable. I will not be strong, like now. I will have medical concerns and costs that I can't think of today. I will not have five kids looking out for me, nor a pension to rely on.
I will be at the mercy of this society I'm helping to build. Do I want it to be mean?
Those later years of mine are NOT just my responsibility. They DO need to be built in, somewhere and somehow, when we calculate the actual costs and values above the profit lines. Labour and resources are sold too cheaply for the common good, even when they are expensive. Everything we've accomplished as a civilization and society has been accomplished at a cut rate for Someone and a tremendous cost for Everyone Else. We've achieved great things as a species, at the cost of many people's lives wasted on toil and stress, just trying to make ends meet all along the economic stratum. Why do we think we are owed nothing but meager pay? How does one price a priceless hour of human life?
Why should employers only pay for my hour when they derive benefit far beyond it, exponentially into the future, and I derive mostly a loss of my vitality and decreasing value with age? Perhaps they do bear some responsibility to my aged self, who no longer can work if she wants to. All profit is an extraction of resources from public ownership to private, at the end of the day. Part of the value of those resources is MINE. If my employer earns more by paying too little for water, electricity, wood, oil, labour, shouldn't they contribute something to the full life cycle costs of the human machines they are using to do it? Like the disposal taxes on electronics.
I'd like to consider together that maybe the employment relationship is more than just a financial contract - it's a social contract that allows society to move forward together with innovation, instead of lagging behind. If employers aren't paying enough salaries and taxes to allow us to solve poverty, improve health, reduce the stress of the population and ensure a comfortable end-of-life, maybe they aren't paying enough. Maybe some of the businesses we're in are actually unsustainable when they are not subsidized by human willingness to undercut each other. Cheap labour actually subverts the Market's "natural" ability to implement Survival of the Fittest by under-valuing and externalizing the true life-cycle costs of the human machine, and thus supplementing unsustainable businesses. That's why we have 79 kinds of gum.
Let's face it, friends: we've built a fast and easy society, but it's just facade. No one wants to sacrifice what they have or admit that maybe, just maybe, having what we have actually isn't fair. Whether "fair" is the goal may be the real question, but that's not the debate I hear out there. I wish it were!!!
We allow corporations and individuals to amass and hoard resources that used to be public, until our governments sold them cheap. And now those corporations say they can't afford to keep up their end of the social contract. Well of course they can't! Not if they expect to extract and exact the levels of profit that have been possible under our highly subsidized ever-growth systems. We're finally coming to the point that our "unlimited" natural resources are limited, and that means they simply ARE worth more. They have higher value to you and me. Oil, water, forests, animals, human hours - these are our public resources and we trade them so cheaply, then ask each other to suffer in old age rather than accept responsibility or insist on acknowledgement of that fact.
The public sector debate is only happening now because they always lag 20 years behind the private sector on "how things get done." They must - that's who pays them, and they need to do it to themselves before insisting that everyone else do it too. It took 20 years to reach the boiling point. In many ways, community governments (now municipal governments) are like the original peoples of Canada, listening to the advice of the fur traders, getting involved and staking out their claim on the new wealth, fighting each other tooth and nail, only to find they've been hoodwinked, tricked, left without the soul they had and a system that tramples them under its feet. That's politics - lagging behind and trapped in the systems they created at the behest of Men With Interests. 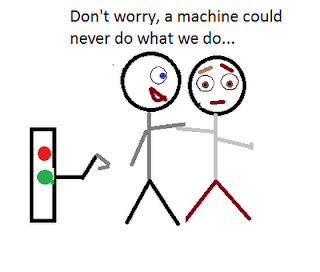 The private sector spent the last 20 years whittling away and dismantling the employment relationship, making it just a contract, turning people into machine parts to be inserted and removed from a process at will. Like a foreign species that enters the harbour on a ship thousands of miles from its habitat, the cancer that transformed Canadian employment DNA came primarily out of the U.S. Those years saw an unprecedented number of Canadian companies, and especially Head Offices, purchased and assimilated.  I was a part of that takeover at several companies. I saw the reactions to how our employment standards protected people, to the "ridiculousness" of having to pay severance, to the "outrageous" "profit-sucking" costs of taking care of employee well-being. The goal was to externalize those costs. Which means, they go back to society.
Over those 20 years, the Corporations did what they did at home - they hired lawyers and lobbyists, and went on a wooing spree. They simply walked into the various governments in Canada and got all that ridiculous paternal shit changed, so now we look a lot like them. Twenty years later, here we are, all of us brainwashed into believing that there is no such thing as an employment relationship, loyalty, security or the expectation that we can go into our difficult older years with some semblance of the lifestyle we currently enjoy.
Then, we see the public sector still getting all that. So we say, why should we pay for it? And we're right.
But they say, why shouldn't we have it? And they're right too. 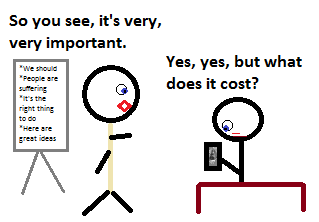 This is not a divisive issue. We all want the same thing, we just don't think we deserve to have it anymore, and neither do you. We base this opinion on experience and information. Our experience tells us that job stability and pensions are ridiculous pipe dreams because they have been stripped from us. The information we receive comes from research that someone paid for, broadcast over media that someone owns, distilled into its simplest possible terms by people who are paid to create interest, and skimmed over in the cracks and crevices of our busy, stressful lives. Maybe we should hold back on opinions for awhile.
What is at stake here has nothing to do with whether defined benefit plans are sustainable. The fact that they aren't means the whole castle's about to come toppling down. Can we please, please keep talking about that?
When they get us asking the wrong questions, we can spend years on the wrong answers.
Posted by CAI (@MrsWhich) at 9:03 AM