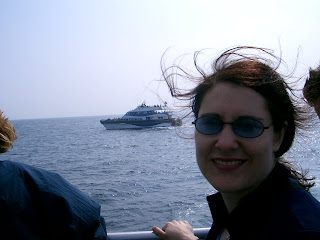 I remember vacations. Times we spent having fun together - day trips, hanging out, watching movies and rubbing each others' backs. Ordering chinese and pizza in the same day and baking a cake to eat after. Long workouts. Leisurely sex.

They were respites. They gave us the badly-needed recharge to keep up the blind maze of life. They exist no more.

Vacations, now, are the time in which we discharge a number of obligations that pile up while we spend our days working and the rest of our time parenting. We're lucky - family child minding provided a few days of "free time" which we spent organizing the critically disorganized of our household and taking care of things long overdue. And then the vacation started.

First was a visit at A.'s parents, a six hour drive North. Not one night's uninterrupted sleep, since I was sharing a room with my restless daughter and a smaller bed than usual with my husband. Socializing with his extended family, balancing parenting with allowing grandmama her deserved space. Tiptoeing around grandpapa because, for no apparent reason, we make each other uneasy. Or maybe it's just me.

Then, it was off to my parents' small, recently-renovated house. They just discovered that their new floors scratch easily and they don't like the door opening and closing when the air conditioning is on, and please be sure not to drip any water on the hardwood in the kitchen. But make yourselves at home.

The house is on the lake. Except the lake water is low this year so it's half a mile of smelly mud and reeds before you hit miles of calf-deep water. I walked for twenty minutes and never found water as high as my waist. Which is totally not their fault, I recognize.

They did their best, and I can see that. I was a challenge to parent, and they hadn't had entirely helpful examples. They used what was good that they learned from my grandparents, and inflicted only some of what was not so good. They are who they are, and they don't pretend to be anything else. It's me who is not satisfied or comfortable with that.

So in any case, I lost it. Only once, when there were SO many opportunities, but still. It poisons everything. They are not forgivers. They are fake forgivers, which is a million times worse because it eliminates any opportunity for connection and shared understanding. It's why I thought I hated them for awhile - because they didn't want to connect with me, so how could they love me? But correlation is not causation, my friends. Remember that if nothing else.

Okay, you thought this was a whine about losing my vacation and now I'm dragging you through the same tired story we all have in one way or another about someone or another. I'll get back to the story.

Days spent trying to keep the kids busy when the wind was too strong to be outside and they just needed to run and climb. No sleep on the hard, uncomfortable futon with the Moon shining on me through the invisible blinds, from both the sky and from the water. She sat with me in sympathy but did not heal me. I am not hers to heal.

Yesterday, the 2 hour pack and load, followed by the 8 hour drive home from my parents'.  Eight hours in a van with recently-toilet-trained preschoolers using dirty, tiny rest stops. What can I say? I trust your imagination.

Fell into bed last night, only to be awakened no fewer than three times by childrens' nightmares and having to pee. And 7am this morning, there they are! In full colour and 3D surround sound. I'm so tired I could cry.

This is my vacation?

I just walked away to write this, left them with my husband. He took a look at my actual eyes for a few seconds this morning, so I think he'll understand. I walked away to put some of this weight down, see if I can let it go as the words appear on the screen. See if I can calm the white-peaked waves this vacation has stirred in my body and my spirit.  Like that lake, water lapping at my knees, inviting me to swim when there's not enough water to swim in. Restless. Unstill.

Tuesday it's back to work. I hope that I find a way to recharge in the remaining days, because right now, I'm running on empty.

(I'm losing myself in the memory with music from Sarah McLachlan: Elsewhere)
Posted by MrsWhich at 8:23 AM

Too happy to be happy

Maverick: Are you happy?

Mav: Anxious about what?

MW: Anxious that this happiness is a trick, a moment in time, a bubble in a sea of torment, chaos and destruction.

MW: There’s something a little off about how incredible my life is. I’m so happy, so often, that I’m almost bored with being happy. But it all feels so fragile. One natural disaster. One car crash. One illness. One abnormal cell. One job loss. It could all come crashing down. And then, then I would NOT be happy.


MW: I am filled with a dreadful awe of the beauty of so many moments in my life, watching them with wonder and fear.

MW: I want to say, I’d like to just stay here, keep just this balance - if I knew it would stay like this, I could relax into it and enjoy it.

Mav: You’re saying you want a guarantee that your happiness quotient won’t drop from current levels?

Mav: And you won’t be happy until you know that you won’t have to be less happy in the future?

MW: No, but I would feel less anxious, and thus more happy, if I had a wider buffer zone for maintaining the current conditions in which happiness exists.

Mav: What does that mean?

MW: I think, if I had enough money that I didn’t have to worry about generating money, it would reduce the number of likely scenarios in which my current life conditions would be threatened. It would take less time and require less effort to maintain the current levels of time spent happy, and pave the way to create more happy time.

Mav: So you think money will buy you the ability to enjoy the happiness you already have?

MW: Intellectually, I know that happiness is not something that can be created externally, but some circumstances lend themselves more readily to happiness than others. Having more time and less accountability for earning income permits increased attention to body and spirit, and direction of energies into areas of highest interest. Lack of money leads to working three jobs you hate and letting your health go. It’s not a false idea. Money does buy a certain degree of happiness. There have been studies.

Mav: I’m sure there have.

MW: It’s not directly correlated. It’s not that more money automatically buys more happiness. It’s that maybe there is a range in which optimal happiness can be attained, and that range has a lot to do with what kinds of things interest you and make you happy. I have a lot of happiness in my life, but worry that I’m just sneaking into my optimal range by a nose. I could fall out at any time. I want more money.

Mav: And that makes sense to you?

MW: I get glimpses where I see the falseness, but they fade away in the stark reality of daily choices made on the basis of funds, not what is best for the family on other metrics that matter to me.

Mav: So having some elements of your life be disappointing or frustrating interferes with your enjoyment of your happiness?

Mav: You’re so happy that you can’t be happy?

Mav: So, how likely is it that you'll have enough money to feel safe? Like, ever in your lifetime?

MW: I don't know how to judge that.

Mav: So it's not very likely that you will be happy in the next five years, even though you live a very happy life?