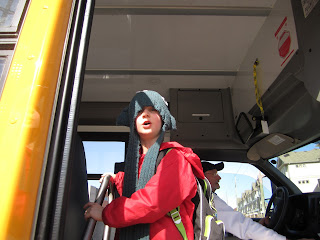 We need to be out the door and walking down the hill in time for the bus. I'm expecting to put on my shoes and GO! But no.

S. has boots on but no splash pants. B. is taking off his boots because the pants aren’t in right. They are not ready to go.

He doesn’t want to wear rain boots. They hurt his feet. They rub his legs when the pants ride up. He wants to wear his new shoes. I tuck his pants into his socks, complaining that we don’t have time for this. He agrees to wear the boots and bring the shoes, but Daddy said they are too heavy for his pack so he will carry them. I don’t like that idea, and I’m surprised Daddy would agree to it. I grab a plastic bag for the shoes.

Time to go. He’s not wearing a hat. She has removed her boots so I can tuck HER pants into her socks and help her put her boots on. More high pitched “Oh, come ON, we don’t have time, we’re already late…” from me, I’ll admit.

3 minutes after time to go, I push them out the door in front of me. Daddy’s behind with the backpacks, and he’s saying something about the shoes. I just want to get out of here! Give B. the pack and the shoes and let’s GO! But they are tusselling and Daddy has said B. can’t take the shoes and B’s crying and melting into a full pool of disappointment, not just because he can’t have the shoes but because he thought he had a deal, he thought this was SETTLED already and now Power is interrupting at the last possible second and taking away what he thought he had accomplished. Or maybe that's me.

I want to talk with him about it but I can’t. He’s getting more worked up, he can’t think let alone articulate, and it’s getting worse. He’s in no fit state to talk. I tell Daddy that I already agreed to the shoes and it’s up to B. to handle the heavy load. Daddy is worried (rightly!) that boots or shoes will be left at school or lost. To me, that is B’s responsibility, but now is not the time to be trying to talk with him about responsibility when he’s in full meltdown and it’s now 5 minutes past time to leave.

Daddy tells me that we’re just teaching him to whine and complain for what he wants. I try to explain the bigger context of the current emotional firestorm that is brewing on the other side of the screen door, how quelling it is currently the primary goal, but there just isn’t time, and he’s not up to listening anyway. I tell him I agreed to the shoes and we have to go, NOW.

I think Daddy’s mad at me, but he puts the shoes in the bag. I’m already out the door and taking a brisk pace down the hill so the kids are forced to run to catch up. B.’s calmer. They both hold my hand.

“So, that could have gone better,” I say.

“Yeah,” B. replies, and I feel him take a deeper breath, relax his grip. I’m a little afraid of how tense he was, too tense for a small child to be allowed to feel. I realize he’s often like an animal in flight mode, ready to duck and repudiate whatever he said to offend, just in case. I feel terrible to create an environment where he feels that way. The world of adults must seem brutal to small children, where their perceived needs and wants are so often subservient to those who are bigger and more powerful.

“It could have gone a lot better if you would have asked Daddy reasonably to talk about it, instead of freaking out.”

“Daddy thinks you made a bad decision.”

“I’ll TRY hard to remember. And if I do forget I’ll get them tomorrow.”

“What if it rains tomorrow?”

“Well, if you forget your boots and it rains, I guess you’d have wet feet!”

He laughs. “Yeah, my feet would be SOAKING!”

“So, are you going to be responsible for your shoes AND your boots?”

“Okay, I expect to see them when you get off the bus tonight.”

Poor little S. doesn’t get much conversation or attention this morning. But she’s had her tantrum mornings too.  Listening is probably good for her.

We get to the bus stop, and within a minute the bus pulls up. 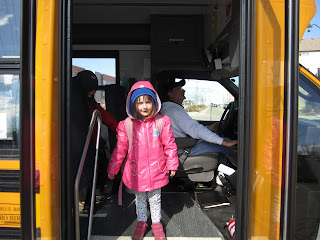 “No, we’re late!” I tell him. I kiss them both and put them on the bus. I wave goodbye.

Phew. I feel my breath let out, another morning rush accomplished.

I start back up the hill, practicing my kung fu sideways movement until I lose my breath, then walking slowly, taking deep breaths in and letting them seep out. I think about what my husband said, and I know it’s the conventional wisdom, but I’m not sure about the cause and effect. When B. cried today, he wasn’t whining or complaining, at least that's not how I saw it. I saw him expressing the outraged disappointment of a person being wronged in a deal they thought was made. And I do want to teach him to stand up that way, against unfairness. I hope he will refine his definitions and learn what battles to pick, but I don’t want to stifle or punish that impulse.

I also wonder what he can possibly learn when he’s all freaked-out worked-up. It seems to me that continuing to hold back what he wants and just say NO, done, finished, when he’s already upset, just erupts the volcano and directs the anger and upsetness outward, at the Power that is withholding. If we hold out to avoid teaching him that crying works, is he also learning that standing up against Power is pointless and he should just shrug his shoulders and give up? Is he learning that he is not responsible, because Power will just decide what it wants even if he is willing to take the consequences of a different decision? Is he learning that you can’t be responsible for something just because you’re not good at it yet?

I think we need to be careful to understand the unintended teachings that come with the lessons we think we’re giving. We can’t know the child’s context for receiving the intention of our action. What we are transmitting may be very different than what they receive. Just last night, I lost my temper and my words and told S. that I wanted her to stop doing bad things on purpose. She started crying uncontrollably. I asked her why she was crying, and she spat at me “Because YOU said I was a BAD GIRL!”

Not only did she hear me say SHE was bad, not that what she was doing was bad, but it turns out that just that afternoon, a “big girl” at school had told her she was a bad girl and to stop always bugging her. The raw hurt she expressed scraped my heart. We never know their context. And the world looks very different on the receiving end of Power than on the initiating end that sets or fails to set intention.

If we're trying to teach independence and self-sufficiency, I'm afraid we will have to take the smaller risks that don't affect their long-term health and well-being, and let them take those risks. If his pack is heavy, it's him who will carry it. It won't kill him. If he loses a shoe or forgets a boot, we can hold him responsible to rectify it - look in the lost and found, scour the school yard, check with the bus driver, etc. It's a pain for us, especially if we have to replace something lost (and I DO understand that worry, too), but it's practice. If he doesn't get to practice what he's not good at yet, and feel what a pain it is to lose something, I'm not sure how he'll learn to be accountable.

But we can't let him rule us through tears. We can't let him make decisions that are too far beyond him. We can't let him take huge risks or put himself in danger. Not yet. One day, we will need to let go even of those protective power applications. The lines are not clear nor steady. The answers are not black, nor white. We're navigating rocky waters with a partially-functioning compass each. Different answers apply to the same questions in different contexts. Learning doesn't happen in one, single incident, it happens over time through practice and observation that reveal patterns to our sub-conscious and conscious minds.

I don’t know the answers. This parenting thing is like an immersion course in being human.
Posted by CAI (@MrsWhich) at 7:03 AM